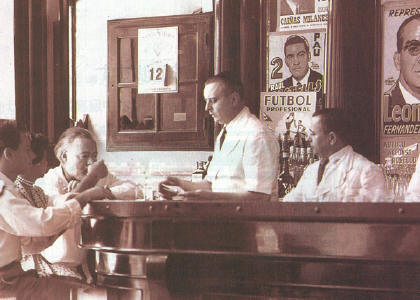 By Romina Monaco
It was a balmy afternoon in Havana. The streets were bustling with people; tourists on horse and buggy lured by the charm of a bygone era, Cubans selling wares and souvenirs on behalf of the regime, children in tattered clothing skirting about with energetic anticipation and also with the hope of enticing a sympathetic passerby to give them a dollar…or maybe two. I, on the other hand, sat at a table in the dark coolness of the El Floridita Hotel Bar. Enjoying a Mohito, I glanced over at my dear friend leaning heavily against the mahogany bar. He looked old now, solemn and beaten. No longer was he the exuberant, dashing man of his youth.

I wanted to make my way to him and ask a simple question, ‘Why did you give up on your extraordinary life?’ Was there a simple answer? Many have said it was the chaotic life of celebrity or perhaps the alleged notorious genetic bi-polar disorder, nicknamed the Hemingway Curse that led him and several of his immediate family to their deaths. 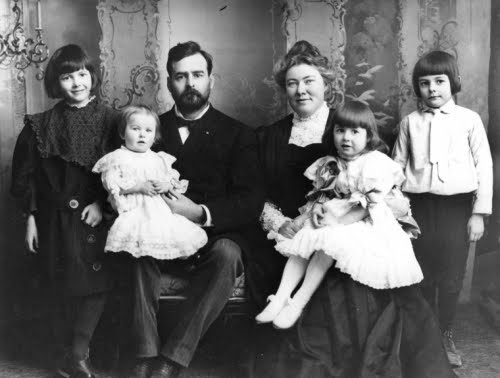 I glance down at the biography on the table. On the cover, Ernest Hemingway is middle aged and standing proudly on his prized boat, The Pillar. These books on his life offer several analytic perspectives of his shocking and sensationalized suicide. In my opinion, biographies have an air of bias where the reader can be easily influenced by the views of the author. By reading these narratives I am told that Ernest was an egocentric, ill-tempered alcoholic, bordering on a narcissistic personality disorder. He is also depicted as a pathological liar and a homophobic who suffered from a confused sexual identity. He battled with friends and family members, cutting off ties cold-heartedly and leaving a stream of casualties behind him. Biographers seem to agree that his mother is solely to blame for all these problems as it is no secret that he despised her.

However, there are several aspects of the author’s life that seem to be overlooked by biographers, all of them too keen to write about his romantic escapades, noted male chauvinism and tumultuous relationships. Other than his early cross-dressing, when his mother dressed him in girl’s clothing until the age of five, they skim over his childhood as something uninteresting and irrelevant. His nostalgic autobiography, A Moveable Feast, flawed in my opinion, was written in his latter years. Can anyone reviewing their life be objective when they are still emotionally affected by the outcome of altering events? 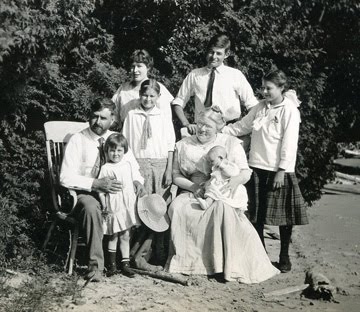 I didn’t begin to develop my own amateur psychoanalysis until I read The Letters of Ernest Hemingway 1907-1922. The personality expressed through his correspondences does not correlate with the destructive and addictive personality biographers depict in Ernest’s later years. However, there is evidence everywhere of his mental instability and I do not argue the events recorded in history. The most noted were the electro shock treatments he received at the Mayo clinic in 1959.

It seems Ernest Hemingway’s greatest aspiration throughout his youth was simply to escape the clutches of his dogmatic and abusive father. His father was an inexorable disciplinarian and his weapon of choice was the whip. It was used in harsh military fashion. Ernest had a profound hatred for his mother and blamed her for his father’s suicide. Or did he blame her for not protecting him as a child? ‘I hate her’, he would say. The world has concluded this animosity stems from his early years when she dressed him in an array of frocks and ribbons. This was a common custom at the turn of the 20th century.

In his later years Ernest ceased all communication with his siblings except one, his sister Ursula, but then she too succumbed to the curse years later, as did his brother Leicester. The curse has been described as a genetic predisposition to manic depression. However, my belief is that it is a dysfunction with its inception lying in child abuse. As a young boy Ernest spent many a night sleeping and reading in solitude in his tent outside the Hemingway home. I wonder if it was to escape the clutches of an austere, extremely religious and violent father. His sister, Marceline acutely described the physical abuse of the Hemingway children in her book, At the Hemingway's. 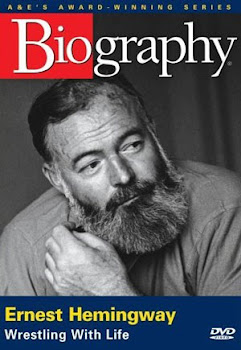 Ernest married several times and was known for having affairs within his marriages. The affairs he had all ended in marriage, even converting to Catholicism to appease one of his brides. Seen as womanizer, I would argue that his romantic history does not seem to be different than that of any man of stature and fame in today’s world. He was not known for the one-night –stand and oddly enough he lost his virginity in his twenties. It seems quite clear that he was attracted to the euphoric sensations of love. Evidence of this is found in letters written to all four of his wives. 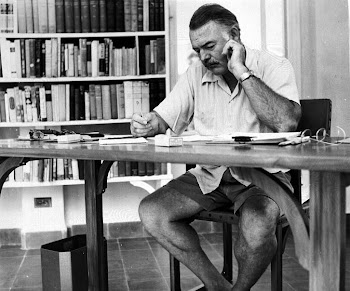 He was an aficionado of the bullfight and hunting. His novel, Death in the Afternoon sparked controversy for its graphic portrayal of the Spanish bullfight. His intent with this book was to describe death and the fear that accompanies it. However, it was viewed as a literary outlet for the pleasures of animal brutality. This opinion was further reinforced because of his frequent African Safari hunting trips, critics ignoring the fact that he was raised by a father who was an avid sportsman in an era when hunting was socially acceptable. He was indeed fascinated by death but I believe it finds ground in his NDE experience during WWI. Despite being one of the greatest Americans novelists who ever lived it seems that poor Ernest always got the short end of the stick, on many accounts.

I glance over at my friend and I think of all the disillusionment he created for himself and his loved ones…all born from the pain within his tortured soul. Ernest was a complex man permeating a paradox of characteristics and ideals. I remember a wonderfully insightful article in American Psychiatry written by Christopher D. Martin from the Menninger Department of Psychiatry and Behavioral Sciences at Baylor College of Medicine in Houston, Texas entitled Ernest Hemingway: A Psychological Autopsy of a Suicide. American Psychiatry further reinforces Martin’s theory of extreme child abuse within the Hemingway family:

‘The accumulating factors contributing to his burden of illness at the end if his life are staggering’ writes Martin, listing Hemingway’s bipolar mood disorder, depression, chronic alcoholism, repetitive traumatic brain injuries, and the onset of psychosis. But it seems clear that the defining problem of his life was the experience of his childhood. His confusion over gender, his Oedipal desire to kill his father for beating him, together led to what Martin calls ‘a retreat into a defensive façade of hyper-masculinity and self-sufficiency’. 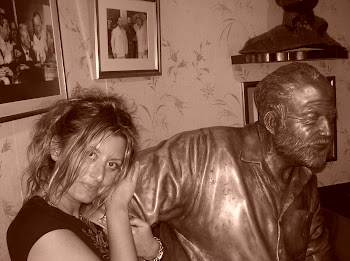 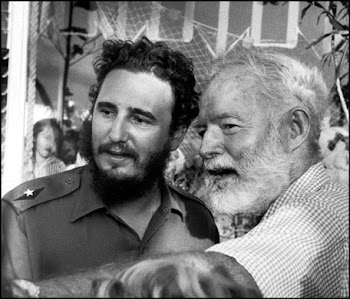 Me and Ernest Hemingway

Gioachino and the Great War

The Long Journey to Calabria

Italian Cuisine Throughout the Ages

The Italian Countryside for the Mind and the Soul

The Italianista and the Perilous Dig

The Italianista and the Dilapidated Castle

No posts.
No posts.
Home
Subscribe to: Posts (Atom) 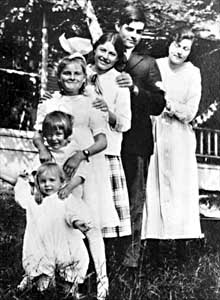 At the age of eighteen Ernest Hemingway made his great escape when he entered the Red Cross and travelled to Europe during WWI. He returned home to White Oaks, Illinois for a short time a war hero. He soon left for Chicago and entered the world of journalism. His visits home were infrequent and by reading the frosty letters written to both his parents it is obvious that he wrote them for obligation. Letters to his siblings were quite different as they contain humour and countless expressions of endearment. It also seems that Ernest, in this early period of his life, began to drink quite heavily. Sadly, the alcohol abuse would continue throughout the course of his life. 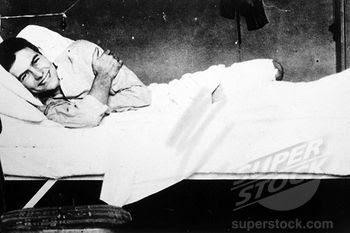 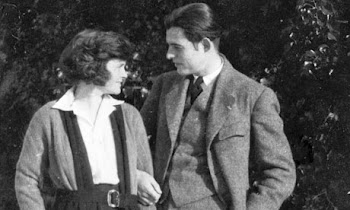 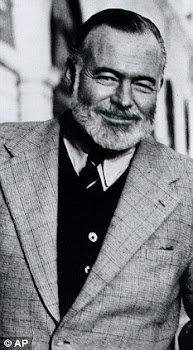 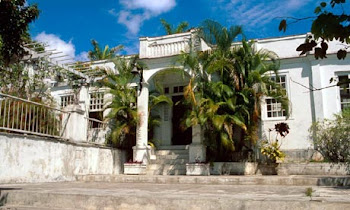 I place my drink on the table. I rise and walk over to my friend at the bar. I put my arm through his and he is still. But as I gently touch the contours of the famous Cuban bronze statue of Ernest Hemingway, I close my eyes and feel it come to life. He is standing tall, healthy and dashing. Ernest is laughing with me as I tell him a story. Just outside the El Floridita we can hear the drowning patter of children running in the street as the bongo melody of the Guaguanco and the Spanish guitar emanate into the sultry, dank air.

The Effects of Racism: My Story of Growing Up Italian

Antonia Ehrenwerth: A Life Not Forgotten

Passion on the Vine